Yesterday was nothing short of an ordeal. Yesterday was the fruition of a challenge I privately set my self a month ago:

That’s it. No physical trials, no emotional trauma involved. I’d got my zines ready – a basic little publication with Episode 1 of the series tucked inside – and all I’d have to do is hand them out over the course of a day, while taking in the awesome sights of the con at the same time. Easy-peasy, right?

That’s what I thought.

It seemed like a sensible plan. From the very beginning, An Inspired Mess has been a project in self-confidence, in learning how to say ‘Look at me’ without shrinking away from the limelight. It’s an attempt to learn how to accept the idea of being read, and judged, and criticised, and not running away from the prospect of failure.

Step 1: write something and put it somewhere public. You can put a big ol’ tick next to that one. The Jack Hansard Series is now 17 episodes and counting, all free to read for anyone who wants to.

Trouble is, it’s easy to throw your work out into the vast ocean that is the world-wide web. You’ll be swallowed by the currents – torrents – of other content, and you can sit back and relax, knowing that you’re drowning in safe anonymity and insignificance.

When I realised Comic Con was going to be within travelling distance in November, a nugget of rebellion formed in my mind. Stop playing it safe, it said. Are you really content with staying here in your sheltered hidey-hole, all comfy knowing you’re not attracting any real attention? Are you happy being a coward?

If you ever want to push my buttons, just call me afraid. I’ve climbed mountains just to give vertigo a good old punch to the face. I’ve done stunt-falls from high castle walls just to prove I was better than the knots in my stomach. And yesterday, I went to Comic Con to prove that I’m not afraid of being read.

Boy, was I in for a surprise.

I arrived about 12:30, happily admitted with no queues, and was first hit by the size of the hall. I’ve never been to a con as big as this. I’m used to conventions that take up, say, a hotel, where the atmosphere feels more intimate; friendlier, perhaps. I knew right away that this wasn’t going to go down the way it had in my head. I thought I was going to pick a spot, hand out a hundred zines in an hour, and then go enjoy myself. 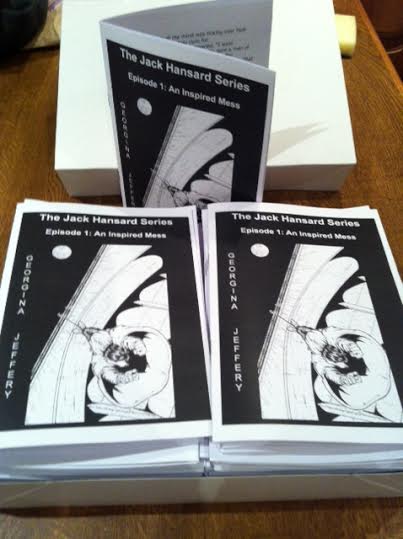 I did the opposite. I spent the first hour browsing the colourful stalls and admiring the awesome costumes . . . all the while my stomach was steadily twisting and tightening with sickly fear. It was horrible, psyching myself up to start handing out the first few copies. I’ll hand them out as I’m walking, I thought. It’ll be easier to keep moving.

Wrong. I began to offer some out, and before I’d got rid of even ten I felt the desperate urge to run and hide in the toilets for the rest of the day. I’ve now got some serious respect for those people who hand out literature for  a living. We’ve become so conditioned to expecting spam that our gut-reaction is to be intensely wary of anyone handing out anything.

Some people took it with a look of deep suspicion, like they were expecting it to explode. The most demotivating reactions were those who just . . . ignored me. I wondered, as I kept on smiling, when did people suddenly stop wanting free stuff? Worse than that were the reactions my imagination was conjuring for me. Images of these poor people reading my little crapfest of a short story and sneering in disgust, throwing it away, calling it a piece of junk. Suddenly I didn’t want anybody to read it at all.

I felt pretty worthless. I’d misjudged what people wanted, and I’d misjudged what I was capable of. I spent five minutes gearing up to every person I approached. Each encounter felt draining, whether they took the free zine or not. Thirty minutes in, I felt like the biggest idiot at the whole event. There should’ve been an arrow over my head; people could’ve paid to take a picture with me.

In the end, it was my partner who made me keep going.

“You haven’t handed one out in the last ten minutes,” he said. “Give one to that guy there. You can do this.”

“You’d tell me if I was being an idiot, right?”

Whatever doubts I have about myself, I trust his judgement. I kept going. And after a little while . . . it got easier.

It always startled me, but  the occasional positive response really lifted my mood, and they became a bit more frequent as I stuck it out. One person even tapped me on the shoulder and asked for a copy. Just at a moment when I was flagging, too. Weird how such a small thing can give you a new lease of life.

My favourite encounter was with a sixteen-year old Harley Quinn with a ‘Free Hugs’ sign.

“Trade you a free story for a free hug?” I asked cheerfully. I felt I’d gotten the hang of it by this point.

As we got talking, I learned that Miss Quinn was fighting her own battle: she was teaching herself to get used to physical contact.

“I’m not good with being touched by people,” she explained. “My uncle’s only had about four hugs from me in my entire life. I decided this morning that I’d try to help myself get over it at the con.”

How cool is that? Here we were, two people giving away a free thing, both for similar reasons, facing fears and fighting our own personal battles. She told me she’d gotten a lot better in the few hours she’d been at it. While talking to her, I realised I had, too.

I don’t expect a sudden upsurge in readership due to my endeavours, but I don’t feel that I’ve failed, either. Because ultimately, the ordeal had turned into a lesson. My aim of the day was to drum up some interest, to actively seek out an audience. Instead, I came away with a better appreciation for what the job requires, and an idea of how I could improve it. The most valuable lessons: 1) Handing out literature is tough. 2) Relax. Who cares if one stranger doesn’t like your material? You won’t see them ever again. 3) Have some faith in yourself. You can do it.

So if you’re someone like me, another insignificant writer trying to drum up an audience, I hope this has been a useful account to you. Don’t be afraid of putting yourself out there. Persevere, and it’ll get easier. The worst that can happen? You learn how to do better next time.

And if you’re one of those people who kindly accepted a Jack Hansard episode from me, I’d firstly like to apologise, just in case I seemed at all rude – I was a bit scared, and just trying to get it over with. And secondly I’d like to thank you, for allowing me to intrude on your life for just a moment to ask you to read me. Most of all, I hope that I don’t disappoint. Because that’s one fear I’m not sure I’ll ever be able to beat.