Now that Season 1 of Jack Hansard is complete, this seems like a good time to take a step back and reflect on the lessons I’ve learned over the past year and a bit. I’ve made plenty of mistakes, and the beautiful thing about mistakes is that they cause you to evaluate the way you work and the way you write. And, crucially, they make you figure out how to do it better next time.

So I present to you the mistakes I made and the lessons I learned from them. Although Jack Hansard is only a free series I publish for fun, these same lessons are applicable to all kinds of serial or episodic writing. Whether you’re publishing webcomics, writing weekly articles for an online magazine, maintaining a daily blog, serialising your novel or working on a short story series, I hope you find some useful pointers here.

Give yourself enough time to write.

I gave myself two weeks to write each Jack Hansard episode. It was just enough time to fit in around my job. I know there are writers out there who seem to be able to churn out a thousand words a day on top of working 40 hours a week, but I’m not one of them. And that’s okay. The important thing is to know your limits, and my limit is one Jack Hansard episode – or about 4000 words – per fortnight. Any more than your limit, and you run the risk of burning out.

You should also consider the quality of your work. Two weeks is the minimum I needed to write an episode, with full proof read and some minimal editing before it was published. And no matter how hard I tried, it was never, ever perfect. Because of course it’s not. For a perfect short story, ideally you want to leave it a few days, and then come back and re-do the whole shebang. The question is how important ‘perfect’ is to you.

At first, I was okay with imperfect – Hansard’s journey was intended as more of a training exercise from my perspective, a challenge to write consistently and meet deadlines. But as the story and characters grew, I grew endlessly attached to them and wanted to do them greater justice. I have made countless edits to the Jack Hansard stories – cleaning up the little niggles, polishing here and there – but it still frustrates me that I can’t pull it all down and piece it back together so that’s it becomes even better. If I were to rewind, I would give myself at least a month to write each episode, and I’d spend more time working out how they all intertwined in the wider scheme of things.

So before you set off on your episodic journey, before you publish anything and set the clock ticking, take some time to work out how long each episode, article, or strip will take you to produce – and make peace with the schedule you set yourself, because later on you’re gunna have a lot of fights with that bastard.

Once you’ve worked out your time-table, stick to it. 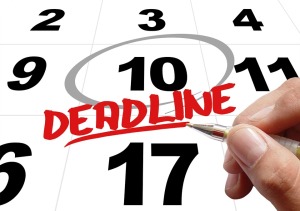 I’m quite proud that I met my fortnightly deadline most of the time, even if it did result in a few episodes I wished I’d spent more time on. It proved to me that I really could work under pressure and still produce something of a decent quality.

I found my biggest set-backs came when I took some time off. Now, sometimes this is very necessary – in my case there was a funeral to attend, there was a massive adventure in Belgium, and there was Christmas reserved for friends and family. There’s no reason not to take these times off – if anything, I’d recommend that you build a holiday into your timetable so that you don’t burn out during periods you know you’ll be too busy to fully commit. But where I went wrong was in not setting a proper ‘return-to-work’ date. Particularly after Christmas, this was a deep holiday hole I fell down where a long stint away from writing the series left me very complacent and lacking enthusiasm.

My key advice would be to keep your holidays short. And just because you’re having time away from the series, doesn’t mean you should have time away from writing altogether. Try using the time to pursue other projects, or enjoy writing just for the sake of it – anything to keep your eye in.

And how can you make your brief holidays easier on both yourself and your readers?

Get started before you start.

Before I launched An Inspired Mess and Jack Hansard, I’d already written the first two episodes to give myself a head start. And, even more cunningly, I’d written two future stories (which became Episodes 11 and 16, both sparking their own sub-plots lasting several very fun installments).

These future episodes were there to give me breathing space, to cover my ass if I couldn’t finish the time-tabled episode in time, in case a family emergency came up, and to provide content during my planned ‘holiday’ in the middle of the series.

All very good in theory. My mistake: I didn’t use my breathing space. I should have kept at least one episode ahead, but I didn’t. If I had, there wouldn’t have been month-long gaps in the summer and winter where nothing was uploaded.

So make sure you have several stories or articles written before you publish the first one, and save one or two for those unexpected gaps that will undoubtedly crop up. 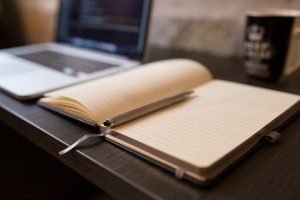 Other people might say ‘make plans’, but I say that’s up to you. Best-laid plans work for some, and the advantages of knowing the plot in advance are obvious. But I’m someone who prefers to plan off the cuff – I’ve the rough plot for the next three episodes, and a vague sense of the overarching story, but I don’t want to be hemmed in by details. The brilliant thing about a short story series is that some very unexpected details can unfold if you just go with the flow and allow the series to take a different direction from time to time.

But if you don’t write plans, write notes. These are those unfolding details that might become very important later. So you just introduced a side-character who you whimsically gave a sense of humour that revolves entirely around fish puns . . . five stories later a joke about a haddock might end up the turning point of the whole plot. Or perhaps it’s the colour of his eyes? Her eyes? Damn, where did our main character meet this person again?

Going over these little details can also help you in times of Writer’s Block, as well as in tightening your overarching storyline. If you’d forgotten that one particular character loved fish puns, reading over the notes could spark that very turning point in the plot.

I was a lousy note-taker, and I wish I’d created a binder full of them for easy reference. Instead I found myself leafing through the hand-written drafts and scanning the published episodes for references to personality quirks and physical descriptions I couldn’t quite recall. In particular, the way Ang speaks – I was constantly referring to the Coblyn’s previous dialogue to refresh my memory. Character profiles: wish I’d bothered.

If your episodic writing is more non-fiction based, I would still suggest keeping notes of the subjects you’ve covered. Say you blog about a different 80s glam metal album cover each week – you probably want to keep a record of what you’ve featured so far, and a list of your favourite words for describing fabulous hair.

Remember to believe in yourself, and the fact that your work isn’t as terrible as you sometimes think it is. Show it to your friends and family and believe them when they tell you they like it. If they don’t – take on board their advice, it’ll only make you stronger. And it’ll make them more invested in helping you; they’ll care about your work when you show that you care about their opinion.

I wouldn’t have got this far without my fiancé nagging me in the background. Even though my genre isn’t really his cup of tea, he’s dutifully proof read and mercilessly criticised all of the Jack Hansard series for me (and half of these blog posts, too). He gave me the push (shove) I needed to get that final episode done when I was suffering from prolonged Christmas/New Year’s/Springtime/GotANewJob blues (read: excuses).

So find someone, or a group of someones, who you can rely on to give you that extra little push when you’ve lost your mojo, and remember that a bit of tough love and self-discipline will get you further than you expect.

If you have any tips of your own I’d love to hear them – just leave a comment below. Take care y’all.